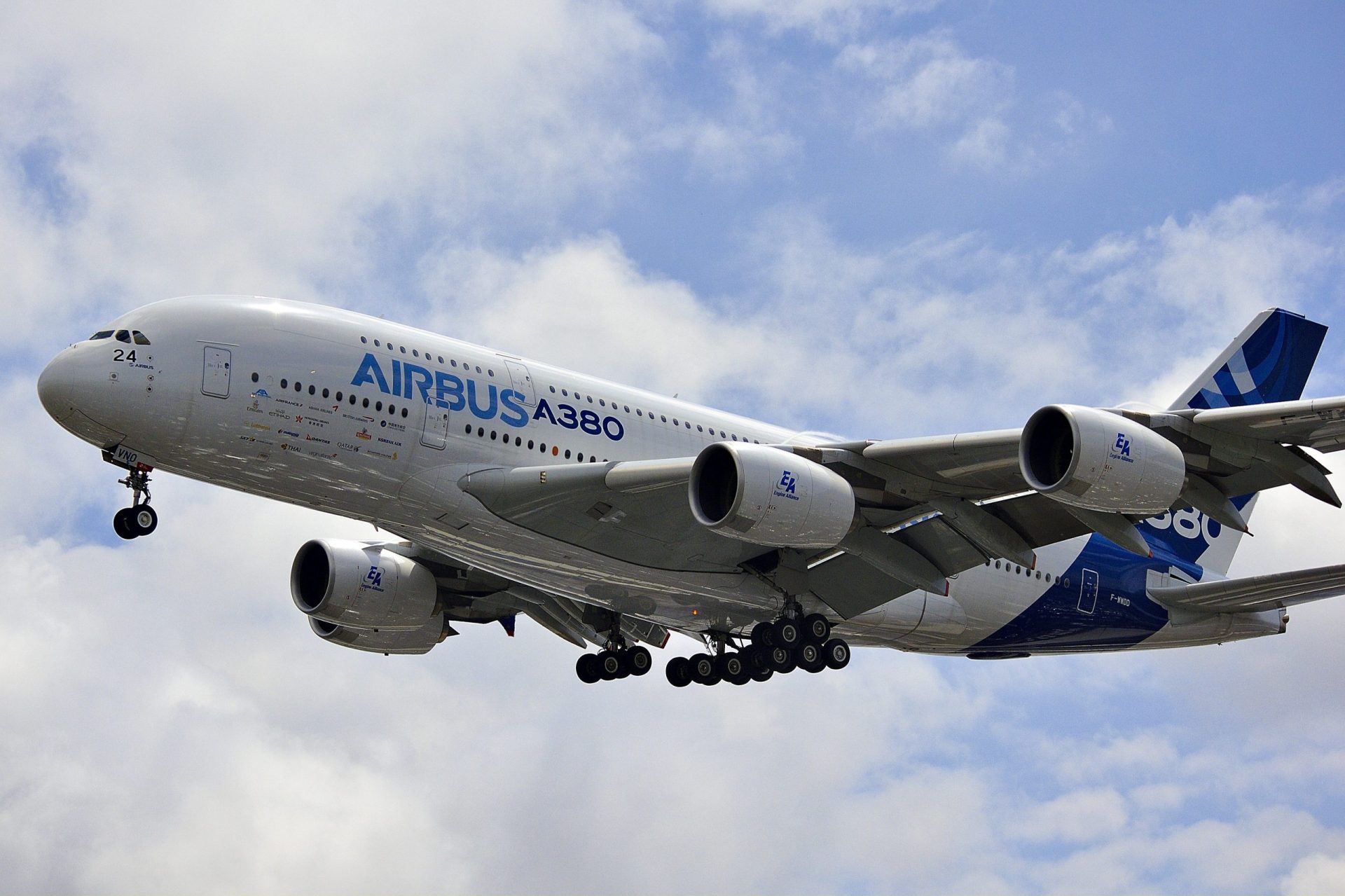 The Airbus A380: A Revolutionary Passenger Jet

Since its inception in 2005, the Airbus A380 has become a revolutionary plane that stands out from other passenger jets. It’s considered to be one of the most advanced and sophisticated planes in the sky today.

The Airbus A380 is an amazing aircraft and a real feat of engineering. As the world’s largest passenger aircraft, it carries up to 853 passengers in its two-deck configuration. With a wingspan of 80 meters and standing 73 meters tall, the A380 is one of the most recognizable aircraft in the skies today. Here are some of the amazing features that make this aircraft unique:

The two-deck widebody aircraft has been designed to make traveling more comfortable than ever before. With wider seats, better legroom, larger windows, improved lighting and air conditioning systems, passengers can enjoy a stress-free and enjoyable journey on this luxurious plane.

The A380 boasts spacious cabins designed to maximize comfort on long journeys. With a total interior space measuring 6,450 square feet (599 sq m), each cabin offers plenty of legroom and generous overhead storage compartments for all your travel needs. And with features such as larger windows and improved lighting, you won’t even realize how far you have traveled!

The A380 can comfortably seat 853 passengers, making it the ideal option for long-haul international flights or large groups traveling together. With up to four classes of service, there is something for everyone, including luxurious first class cabins and fully reclining seats in economy.

Powering this impressive plane is four ultra-efficient turbofan engines. These are responsible for providing an exceptional amount of thrust power while also remaining quiet during flight. The aircraft is also fitted with fly-by-wire technology which allows it to quickly react to any changes in environment or pilot inputs.

Not only is the Airbus A380 more powerful than other passenger jets but it also offers better economy when it comes to fuel efficiency and range. With a range of up to 8500 nautical miles, passengers can fly further without needing to refuel – something that could save operators time and money over longer flights. Furthermore, thanks to the lower drag coefficient due to its modern aerodynamic design, fuel consumption is significantly reduced when compared to other jetliners of similar size.

Thanks to its powerful engines, the A380 has a maximum cruising speed of 575 miles per hour and a range of 7,700 nautical miles (14,000 km). This allows it to cover vast distances quickly and with little need for refueling. Additionally, its fuel efficiency reduces emissions significantly compared to other large airliners.

The Airbus A380 is equipped with advanced avionics technology to help pilots navigate safely and efficiently around weather systems or airspace congestion. Furthermore, passengers can stay connected during their journey thanks to inflight Wi-Fi access points located throughout the plane’s interior. Other amenities such as adjustable air vents and additional climate control options further enhance onboard comfort levels.

The safety features built into the Airbus A380 have been rigorously tested and passed through extensive certification processes with flying colors. These include things such as back up hydraulics, emergency descent procedures and even “flight envelope protection” – a system which helps ensure that no matter what happens during flight, the plane won’t exceed its operating parameters (and hence fall out of the sky).

From passenger capacity and performance to interior design and technology advances – The Airbus A380 offers an unbeatable flying experience for both travelers and crew alike!

Which airline will have the largest fleet of Airbus A380s in 2023?

According to recent data, Singapore Airlines will be the top Airbus A380 owner in 2023, with 19 aircraft in its fleet. Emirates Airline is projected to come in second place with 15 A380s in its possession, while Qantas Airways will own 12 planes by that time. The A380 superjumbo is a two-decked, four-engine airliner which first took off in 2007. Since then, it has become one of the most popular and recognizable aircraft models due to its size and range capabilities. Although sales of the A380 have been on a decline in recent years, some airlines are still investing in them and utilizing them for long-haul international flights. As the world’s leading airline when it comes to Airbus A380 ownership, Singapore Airlines looks set to maintain its position at the top until at least 2023.

Who owns the most Airbus A380?

Emirates is currently the airline with the most Airbus A380 aircraft, with a total of 117 planes. Emirates was the launch customer of the A380, ordering the first batch of ten planes in 2004 and taking delivery in 2008. Since then, Emirates has continued to be a strong supporter of the superjumbo, with more than 100 of the planes currently in their fleet. Other airlines that have sizeable fleets of A380s include Singapore Airlines (42 planes), Lufthansa (14 planes), Qatar Airways (13 planes) and British Airways (12 planes).

How many A380s does Singapore Airlines have?

Singapore Airlines currently has a total of 19 Airbus A380s in its fleet. These planes are used to serve some of their longest and most popular routes, such as from Singapore to London, New York, Los Angeles, Hong Kong and Zurich. The airline has plans to add an additional five aircraft over the coming years. The superjumbo offers passengers plenty of comfort and luxury features during long-haul flights, making it one of the most sought-after airplanes for long distance travel.

What is the biggest A380 in the world?

The world’s biggest Airbus A380 is the A380-800, the largest variant of the iconic four-engine double-deck jumbo airliner. The A380-800 has a wingspan of 80.8 meters and a maximum takeoff weight of 575 tons. It has a length of 73 meters and a height of 24.1 meters, allowing it to transport up to 853 passengers in three classes or as many as 1,150 people in all-economy seating configurations.

Emirates is one of only two airlines currently operating the giant aircraft with Singapore Airlines being the other one. The aircraft also includes advanced flight control systems, as well as in-flight entertainment options, including audio/video on demand for each seat and an improved air flow system for better cabin environment.

The Airbus A380 is a large and popular double-decker airliner that first flew in 2005. While it has been involved in some serious incidents, an Airbus A380 has never crashed. In 2017, a Singapore Airlines flight experienced engine failure over Indonesia shortly after takeoff but the pilot was able to land the plane safely at Changi Airport with no fatalities or injuries reported. Similarly, another Singapore Airlines flight had to return to Singapore due to smoke in the cockpit, however it too landed safely. The most serious incident occurred when an Asiana Airlines flight struck seawall at San Francisco International Airport during landing in 2013; three people died and many were injured as a result.

Which airport has the most A380s?

According to data, the airport with the most Airbus A380s is Dubai International Airport in the United Arab Emirates. This airport has 94 registered A380s which make up around 21% of its entire aircraft fleet. Singapore Changi Airport and Hong Kong International Airport follow closely behind with 78 and 76 A380s respectively. With their large fleet of A380s, these airports have become hubs for travelers flying to international destinations.

Where does Singapore Airlines fly the A380

No, an A380 cannot land on any runway. The A380 is a very large aircraft and has special requirements when it comes to the runway length and width needed for safe landing. This means that many airports have had to extend their existing runways or construct new ones specifically designed to accommodate this massive plane. Furthermore, the shape of the A380’s wingspan requires the presence of special facilities at each end of the runway to enable proper takeoff and landing operations. Therefore, it is not possible for an A380 to land on any standard runway as there are certain parameters which must be met in order for such an aircraft to be safely landed.

Generally speaking, the Airbus A380 has a maximum range of 15,200 km (9,400 miles) meaning it can remain airborne for around 18 hours at cruising speeds. In theory, its maximum flight time could be up to 24 hours – although this would require modifications to its onboard systems and payload.

The cost of an Airbus A380, one of the largest and most advanced aircraft ever made, can range anywhere from $375 million to $445 million depending on the specific model. Airbus also offers customization options, which could potentially add even more to the total price tag. Additionally, there are many ongoing costs associated with owning and operating an A380 such as crew training, maintenance and spare parts. All these expenses make it one of the most expensive aircraft in production today.

The Airbus A380 is one of the most popular and widely used aircraft in the world. As of 2022, the following are the top 10 operators of this giant plane:

• Emirates – With 119 Airbus A380s currently in its fleet, Emirates is the largest operator of this aircraft type.

• Qantas Airways – One of Australia’s flag carriers, Qantas has 33 Airbus A380s in its fleet.

Overall, it’s easy to see why the Airbus A380 has been so successful since its launch – combining power, luxury and comfort all into one package makes for a very appealing airplane for both commercial operators as well as private customers alike.